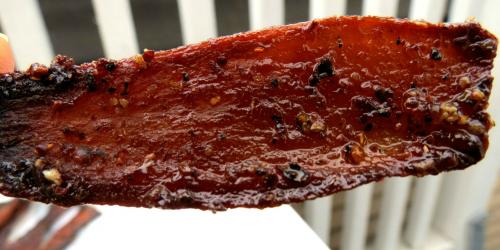 I was a vegetarian from early childhood until I about six years ago (a long story involving the Sonoma County Fair's petting zoo and an ill-timed slice of pepperoni pizza). Even today, though I do enjoy meat, the person I share most of my meals with keeps kosher, so it's just easier to cook predominantly vegetarian and pescatarian meals for both of us.

Throughout my time as a vegetarian, and now, as a someone who still loves vegetarian food, I have been continually frustrated by vegetarian products masquerading as meat. It just seems like an insult to vegetables, which, in my opinion, are perfectly delicious as they are--no meat-ification needed.

Besides, some vegetables can even be naturally meaty...which brings me to Exhibit A: The King Oyster mushroom. 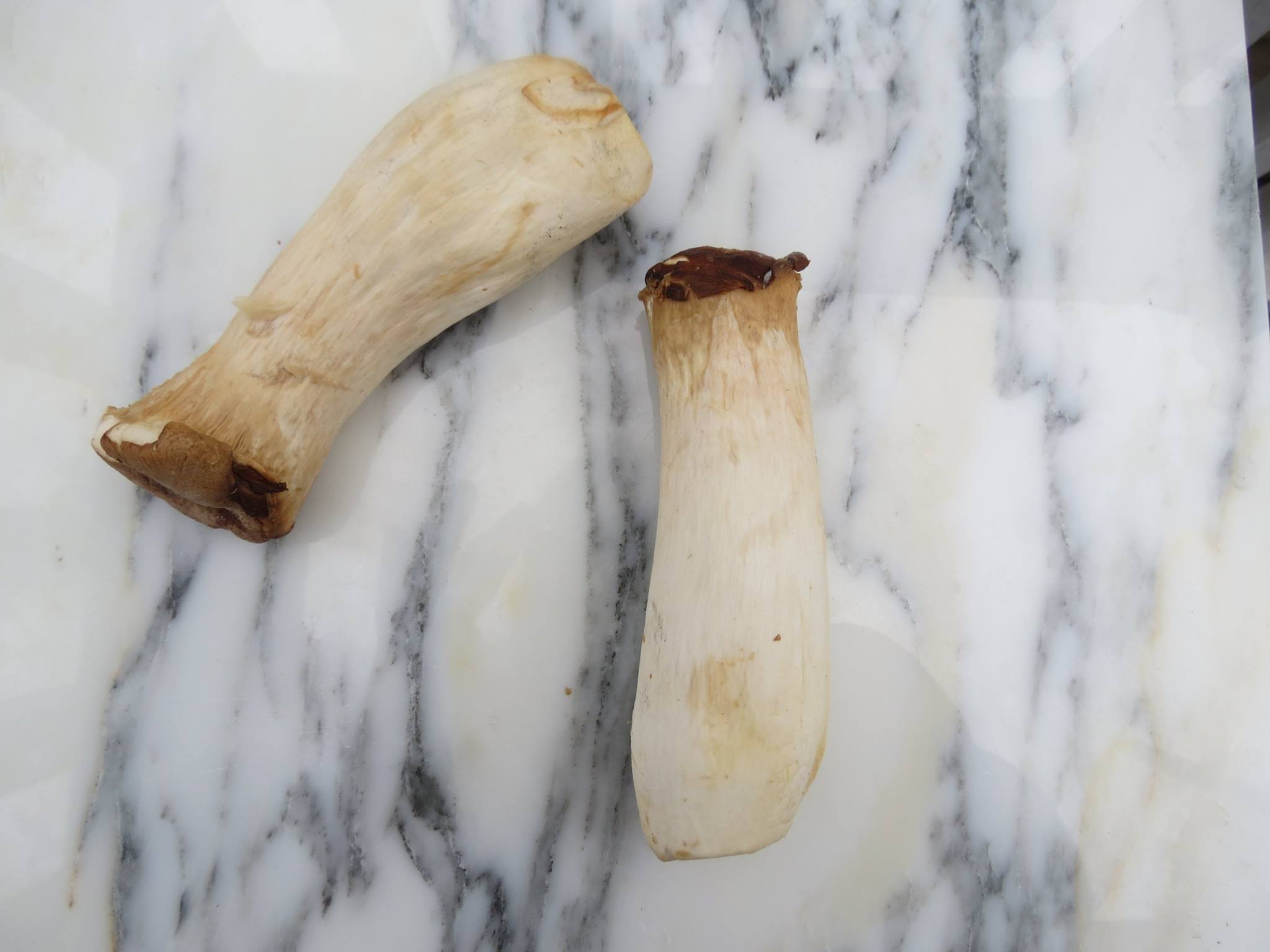 Mushrooms have long been a meat "substitute," especially in hearty dishes like pasta, or on vegetarian sandwiches, where their chewy texture and deep umami essence satisfies carnivorous cravings without the use of animal products.

"These are so smoky and meaty," he commented between mouthfuls. "They're almost like bacon."

And with that, the foodie floodgates in my brain were opened and, until I could get back into the kitchen to experiment, I could think of nothing other than how to turn the remaining mushrooms in the refrigerator into sweet, smoky, crispy bacon that even my kosher, mostly vegetarian boyfriend could eat.

I am pleased to tell you that I was blissfully successful. With some inspiration and guidance from this Serious Eats recipe by J. Kenji Lopez-Alt I created something I know I will make again and again, whether alongside fried eggs, tucked inside a BLT or grilled cheese, or crumbled atop a Cobb salad.

In the Serious Eats recipe, smaller mushroomse are called for, but one reason the King Oysters seemed like an ideal base for this recipe is because of their size. Sliced lengthwise, they nicely resemble a halved slice of real bacon. 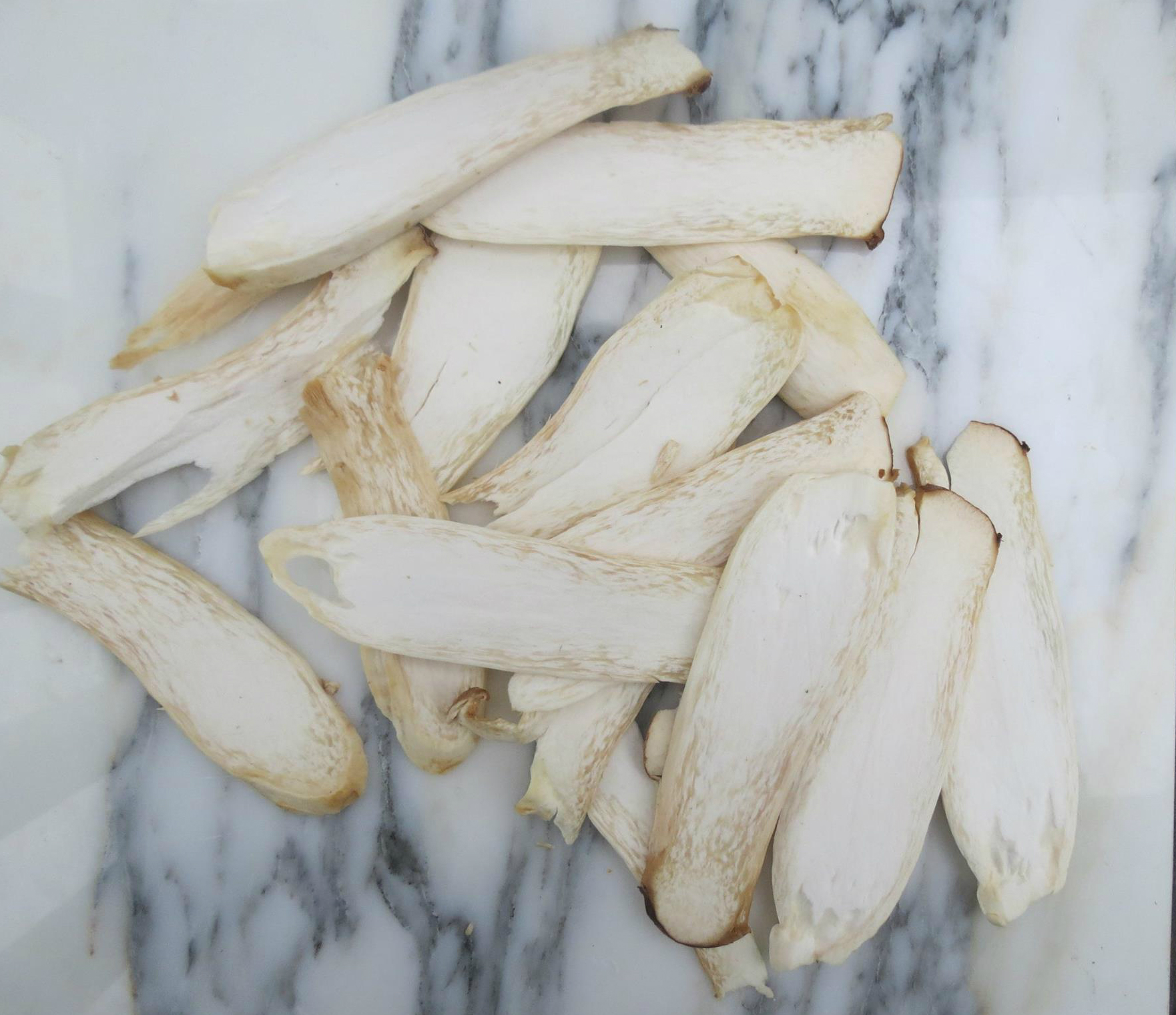 This also makes them an ideal size for sandwiches.

In the Serious Eats recipe, Alt-Lopez takes his mushroom chips to the next level by actually smoking them. Lacking a stovetop smoker (and being the owner of a smoke alarm that cries wolf at the tiniest amount of steam), I decided to try to coax some smoky flavor into my mushrooms with gorgeous smoked paprika... 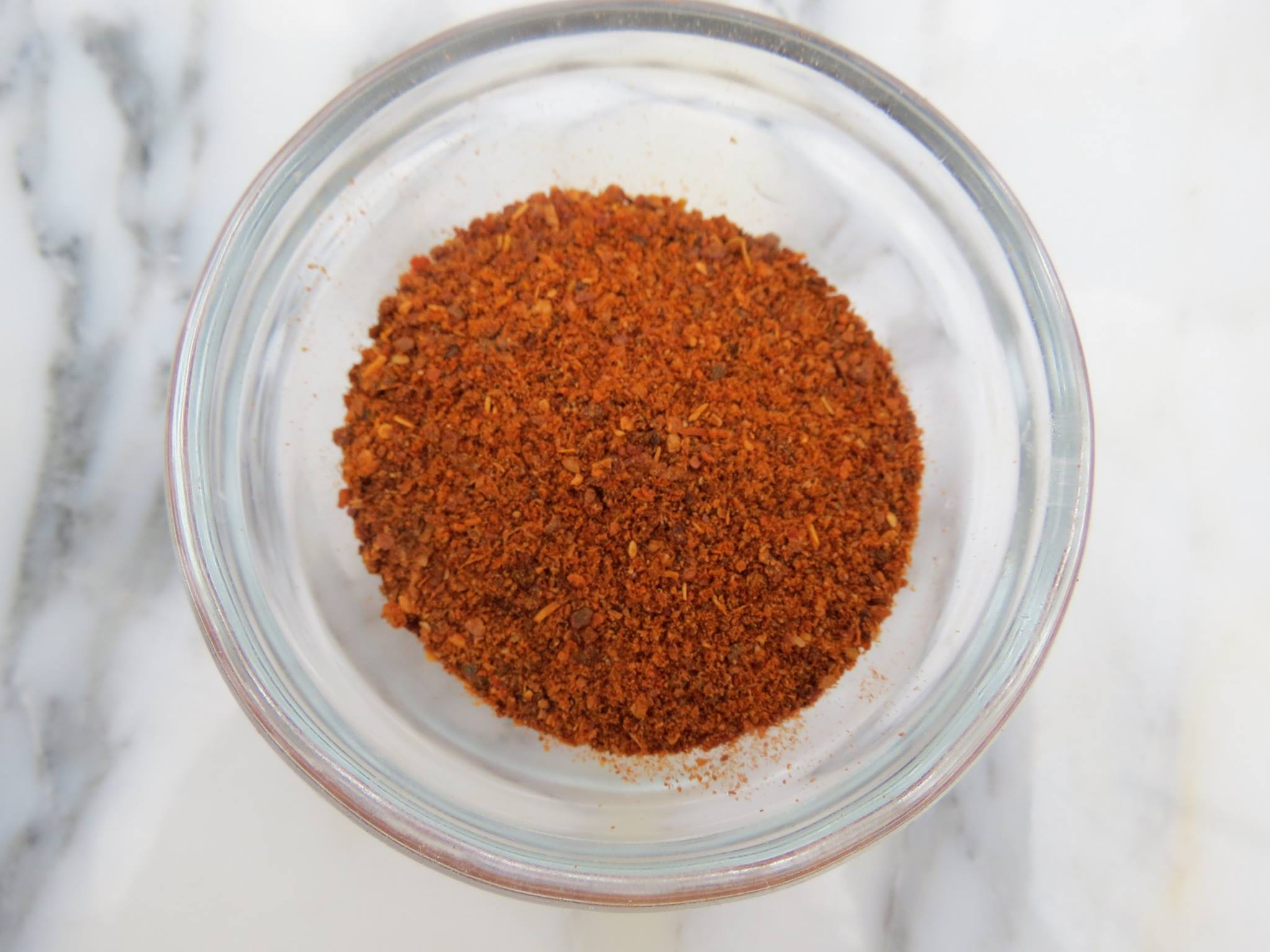 ...as well as a little smoked salt. This brand of the latter, from Trader Joe's, has apparently been discontinued, but I had about 1/2 a bottle in my cabinet. If you can't find smoked salt for a reasonable price at your grocery store, it's pretty easy and cheap to make at home. 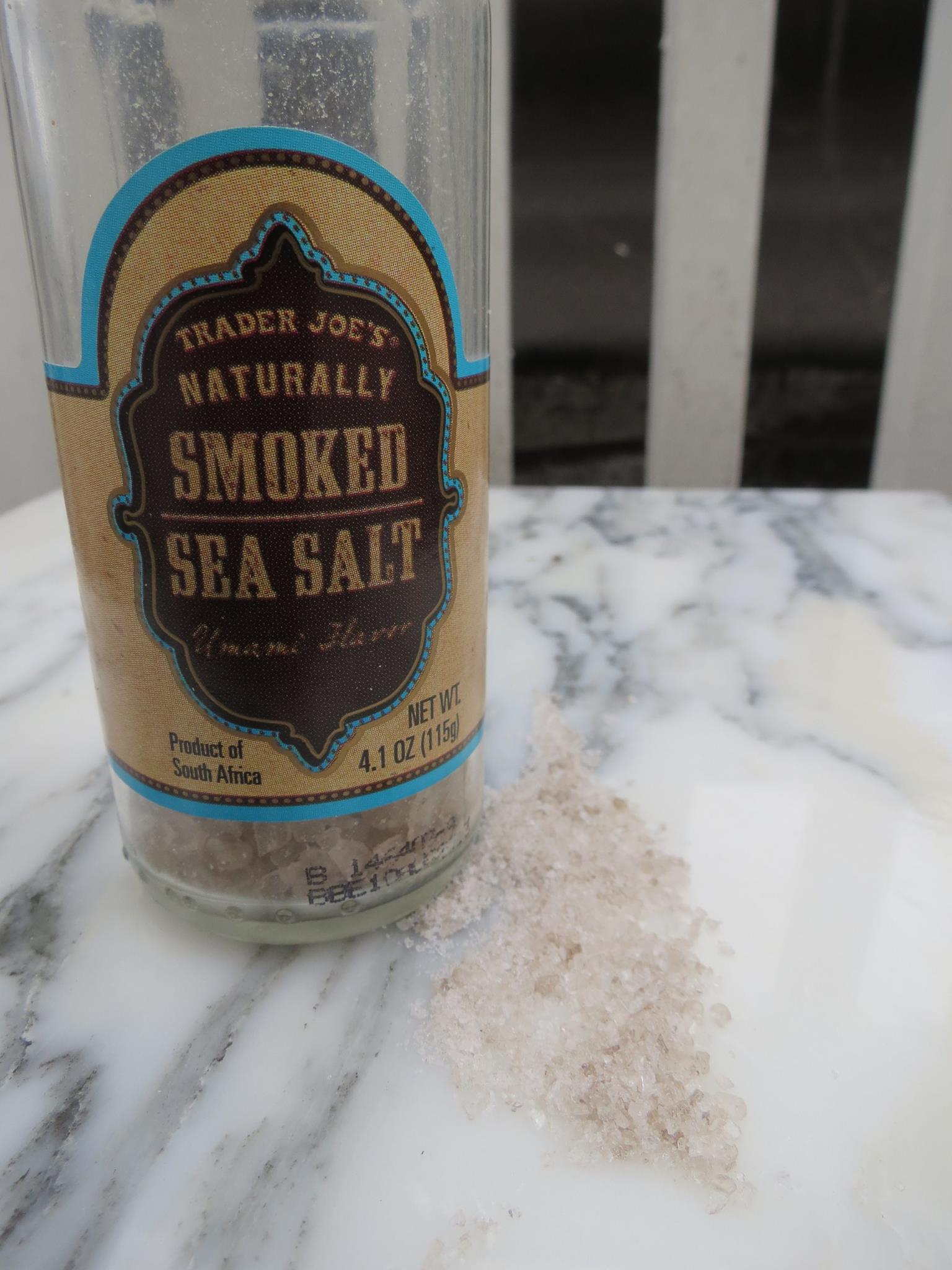 I mixed these smoke-ifiers with some brown sugar (which always goes beautifully with bacon), and plenty of black pepper, and tossed the mixture with my mushroom strips, after giving them a dousing of extra virgin olive oil to help them further mimic bacon's fatty deliciousness. 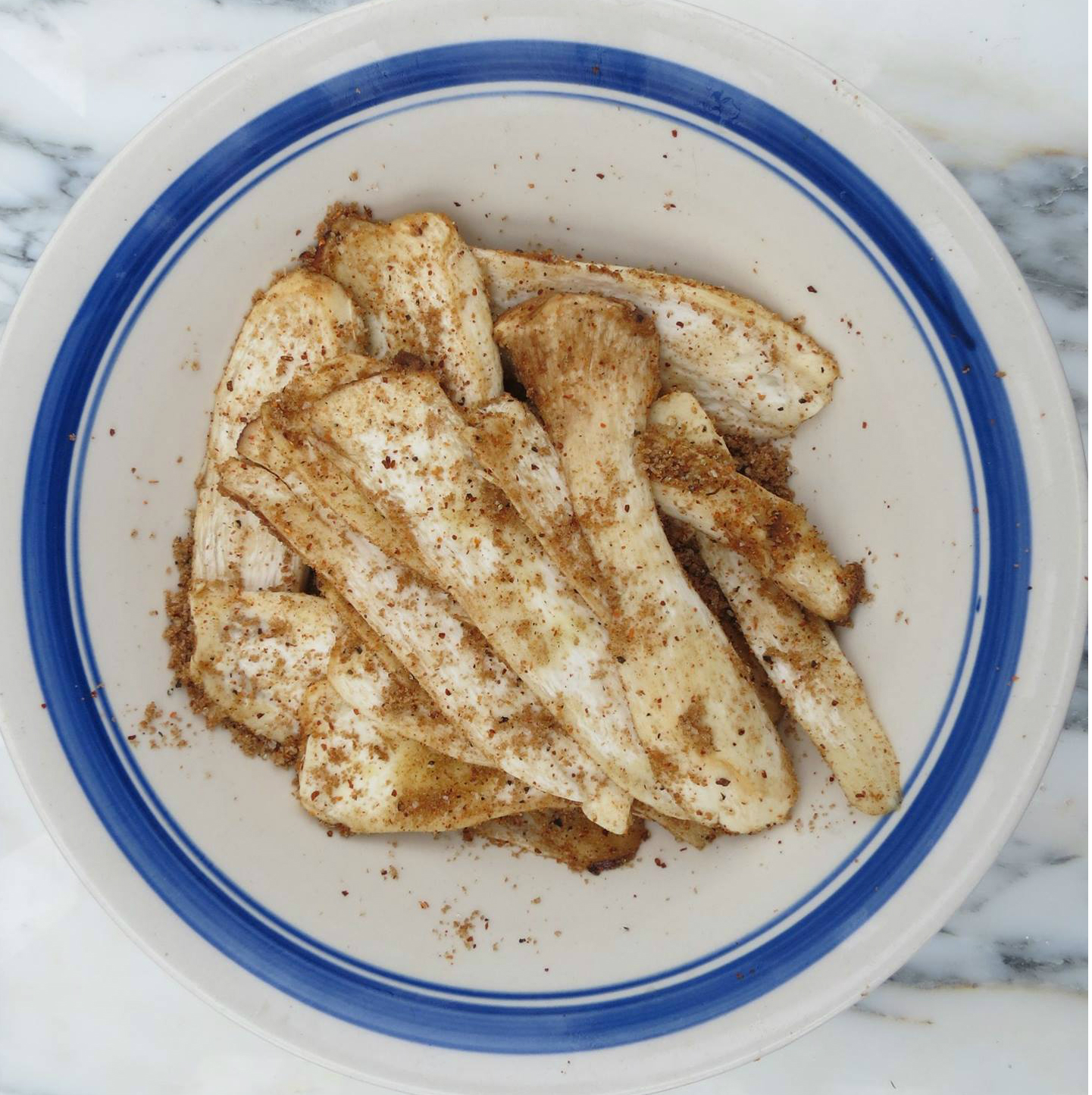 The strips went onto a lightly greased baking sheet and into the oven at a relative low temperature (325 F) to get bacony and crisp. 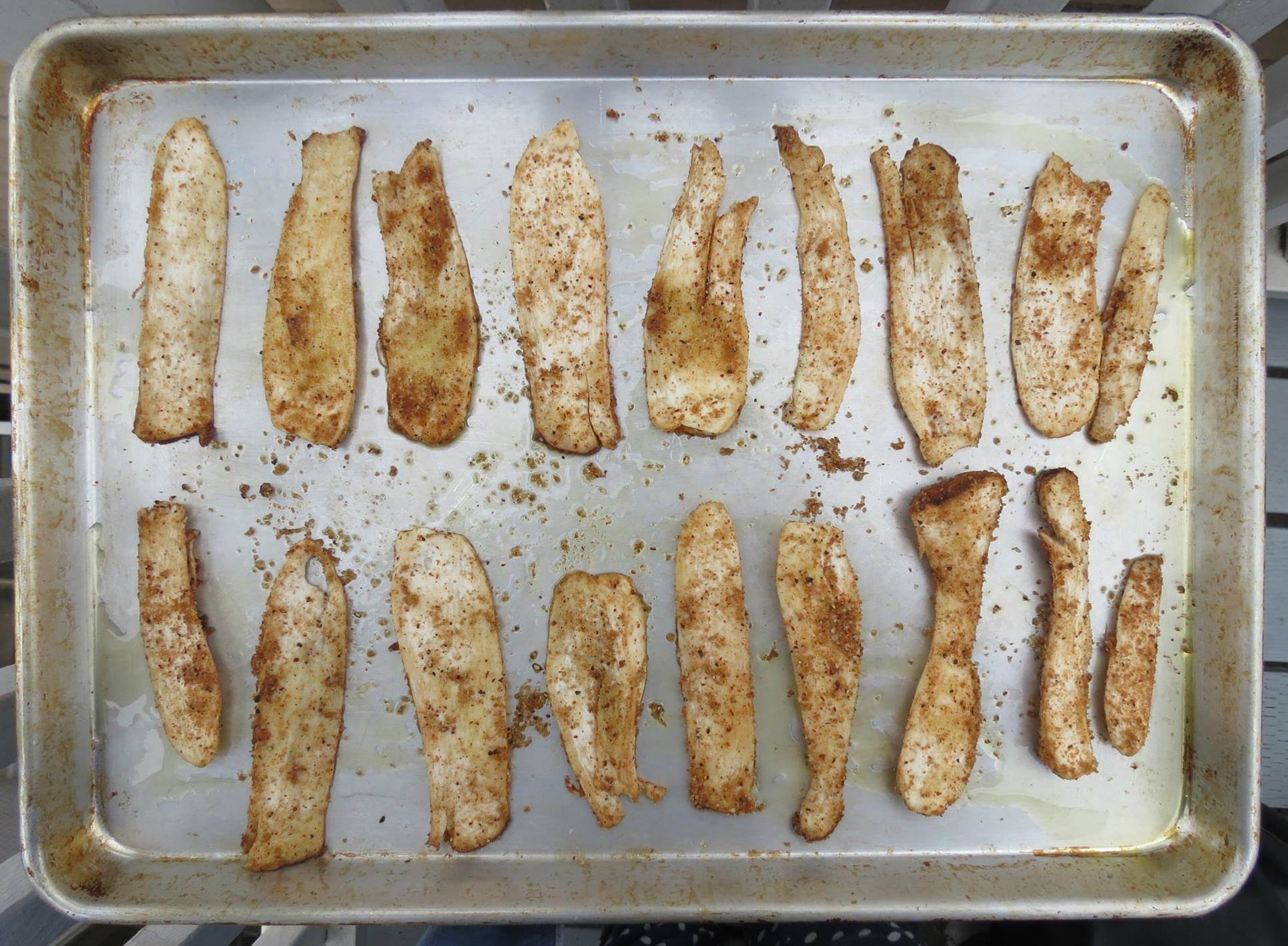 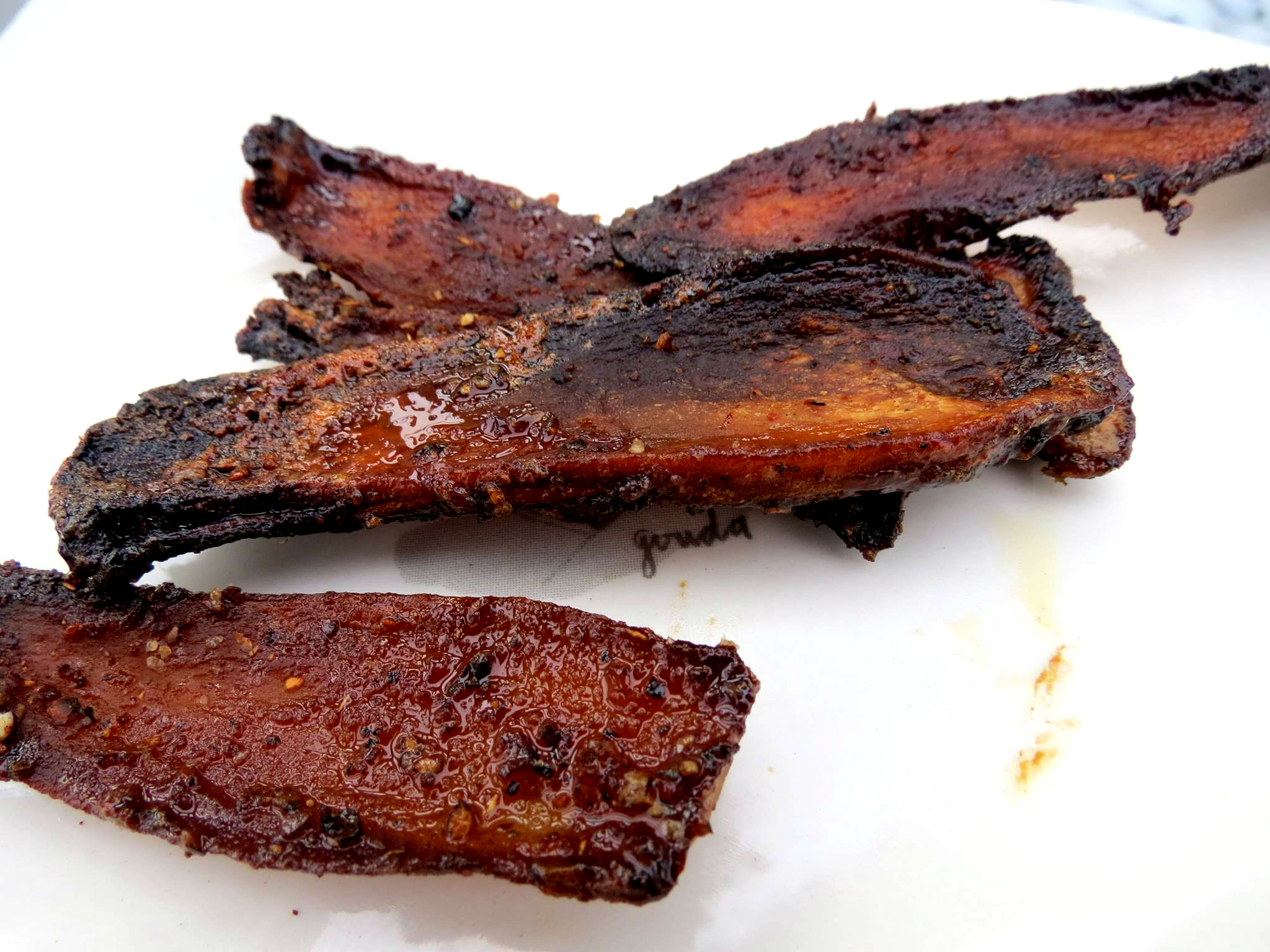 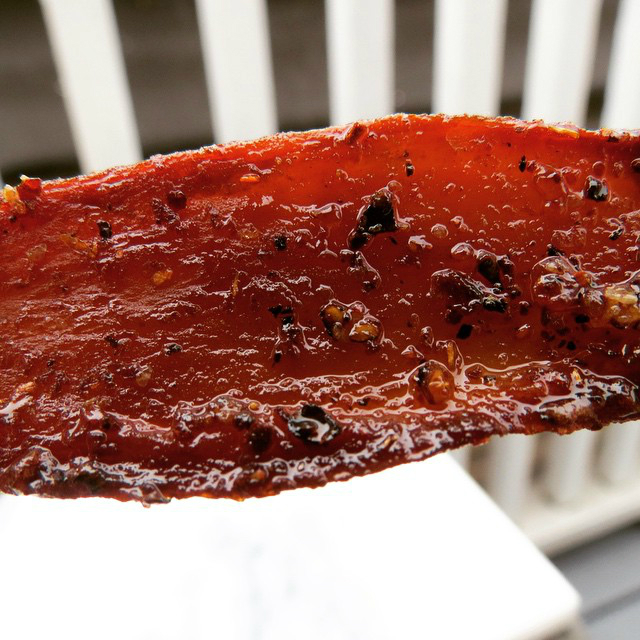 You can obtain delicious Spanish Smoked Paparika from Pensey Spices (Pensey.com), in WI, & another source of several different kinds of Smoked Salt or infused artisan salt from Saltworks (salteorks.com) in WA. Thanks so much for the great ideas on this veggie take on a bacon substitute.

I tried this recipe this weekend, and it came out beautifully. I found my king oyster mushrooms at a Korean grocery, where I think they were cheaper than they would have been at, say, Whole Foods. The spice rub was delicious, and I think it would also be excellent on meat or fish.

It’s practically written and a very great deal to pay attention further more.Superb sharing! Thanks much

The content topic is valuable for me; you precede sounds great for other readers.

Quality useful article! This is an excellent reading and interactive content worth for the online readers.

This would be awesome for a summer bbq in the garden! Thanks for the recipe

Those look amazing, they actually look like actual ribs! I’m getting hungry, will try this recipe some time, even though I’m not a vegetarian! Thanks for sharing your recipe.

Very nice recipe, thanks for sharing! Cannot wait to try how they taste!

Want to experiment pleasure and excitement in life? We have the perfect answer to your imagination! Enjoy the warm company of Call Girls in Delhi With Photo and take your senses to a new level of pleasure. When it comes to providing best Delhi girls, Mobile no one does it better than us.

I did not eat this recipe before it.I will try to make it at my home with my own hands.Then I will share with you its taste.

Thanks for sharing your recipe

Your MUSHROOM BACON is great

Great write-up! never in my wildest dreams would I have ever thought of combining bacon with mushroom. Pleasantly surprised to be honest!

Great info thanks for sharing! Single <a href=“https://vapefade.com”>Disposable Vape</a> are perfect for those new to vaping. With an extensive choice of flavours, the disposable e-cig offers an easy to…

RKSA Packers & Movers provide Affordable packing and moving service, we pack your goods with quality items so that your goods are not damaged during the transfer process, and then we move your goods from one point to another safely. Hire our relocation service for your relocation.

Perfect timing. I am hosting a cookout this weekend and my oldest son wanted ribs. I will try this recipe for sure. Carpet Cleaning

Your article is contain off interesting information. Nice job.

Very nice recipe, thanks for sharing! Cannot wait to try how they taste!

This is the first time that I visit here. I found so many exciting matters in this particular blog, One thing I would like to request you that pls keep posting such type of informative blog.

I appreciate this blog your blog is vert help full for me i really enjoyed this stuff dude.

I always found very much interesting content on your posts. keep posting, thanks for sharing us and giving us your precious time.

I have been reading a lot of stuff about it but it is differently presented, i loved to read this. Keep it up.

HAVE YOU LOST YOUR HARD EARNED FUNDS TO THE WRONG HANDS?
MEET THE PROFESSIONAL HACKERS FOR HIRE TODAY.
⏱ 1min
Hiring a professional hacker has been one of the world’s most technical valued navigating information. leroysteckler@gmail.com
Regarding:
•Recovery Of Lost Funds,
•Mobile Phone Hack.(Catching A Cheating Spouse).
•Credit Score Upgrade,
•Email Hack.
•Uber free Payment. High prolific information and Priviledges comes rare as it has been understood that what people do not see, they will never know. One of the affirmative ability to convey a profitable information Systematically is the majoy factor to success Welcome to The GlobalKOS hacking agency where every request on hacking related issues are fixed within a short period of time. For more infomation and profound Hacking services,
Visit: leroysteckler@gmail.com¶

This is very fascinating blog.

Thanks for the blog loaded with so many information.

yes definitely this type of blogs are really help for people great job.

Great blog thanks for sharing

You’re so talented in writing. God is truly utilizing you in tremendous ways.

wow she is so gorgeous, nice pics.

Nicely presented information in this post, I prefer to read this kind of stuff. The quality of content is fine and the conclusion is good. Thanks for the post.

Your experience is great and learning for other people.

Yes we should not forget the experience, nations those forget there past can’t get

Lovely pictures, awesome these are looking so funny interesting but professional and artistic pics.

I just came across to reading your blog it serve very useful information about the interiors thank you.

I must admit I have popped in a read a good number of your blogs but I have no idea how to post a response over there, so I’ll tell you now how good you are at describing the stuff your at

Thanks for Sharing This Article.It is very so much valuable content. I hope these Commenting lists will help to my website

I’d like to know how everything is going with this.

I’m eager to find the valuable information and for me this is the right place to get the good stuff.

I’m eager to find the valuable information and for me this is the right place to get the good stuff.

I really appreciate all the great content you have here. I am glad I came across it!

Thanks for sharing your thoughts with us.. they are really interesting.. I would like to swervey more from you.

Buy high quality leather jackets and coats at unbelievable prices at CelebJacket.com and indulge in the most exciting shopping experience ever! <a href=“https://www.celebjacket.com/”>Celeb Jacket</a> Wear our new collection to stand out in the crowd.

Very delicious recipe i have noted and i will try this sunday for my guests .. hope they like it !!

Looking forward to it thanks. check our website for the best product

Interesting, I did not know that you can make bacon mushroom. Thanks for tips. I looks really yummy.

Thank you very much for sharing your mushroom bacon ingredients. Please, share more ingredients. We love to learn more.

Really wonderful post that you have provided to us. Great site and a great topic as well. I really get amazed to read this. Its really great

Good place walked into the future together with bookmarked as their favorite websites. That I can’t procrastinate to read the paper even more with everyone.

Your work inspires us. Keep up the good work and we will continue to support your web posts.

Thank you very much for this advice, I believe that it is very helpful! I followed your steps up to step 3 and now

Wow. I wanna try this. Thanks for sharing the ingredients and directions on how to cook crispy mushroom bacon.

This is very nice and wonderful recipe i love it.

Thanks for sharing this post, very informative and helpful, keep posting and updating all users!!

I appreciate this blog your blog is vert help full for me i really enjoyed this stuff dude.

Very well. Keep sharing more. Please also read mine at Fun Livin’ and let me know where I can improve.

I am very jubilant to observe this. This is the form of manual that requires to get hold of and now not the desultory wrong records that is on the opportunity blogs. Appreciate your sharing this first-class posting.

Yummy i like Mushroom bacon. Thanks for sharing nice information with us. i like your post and all you share with us is update and quite informative, i would like to bookmark the page so i can come here again to read you, as you have done a wonderful job.

This is a great website with lots of useful and informative posts. Please keep posting more

Thank you for your valuable information that you give us. Keep it up and share more articles like this

Major and bewildering post here. I’m clearly euphoric and genuinely influenced to look at your blog. I see that more proportionate obsessions with this post should change our thought. Respect you for sharing a drawing and cool post. Keep it up